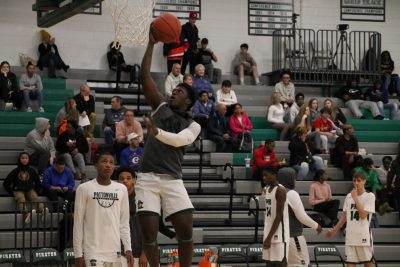 Pattonville’s boys’ basketball team is led by team captain Levi Banks and Coach Kelley Thames. While the boys are 4-7 with their games, they’re working hard to make it to the championship when they come to a close on the 2019-2020 season.
Captain Levi Banks said that he feels the season is “already starting better than last’s…the chemistry on and off the court feels stronger.”
Coach Kelly Thames hopes to grow as a team this season and improve each game and overall as a team. He’s a very passionate coach and tries to instill that same energy and excitement into the players.
Before a game, Coach Thames says the team has a “review on offensive plays and defensive strategies we will run for the game.” After Coach Thames reviews with the players, Levi Banks says he “plays music and jokes around” with the team to loosen them up and get ready for a game.
Both the players and the coach find the sport very rewarding in different ways, but both appreciate the connections and friendships it can bring.
The boys basketball team will be taking on Parkway North High on January 21. Come out to cheer on the Pirates as they take on the Vikings.