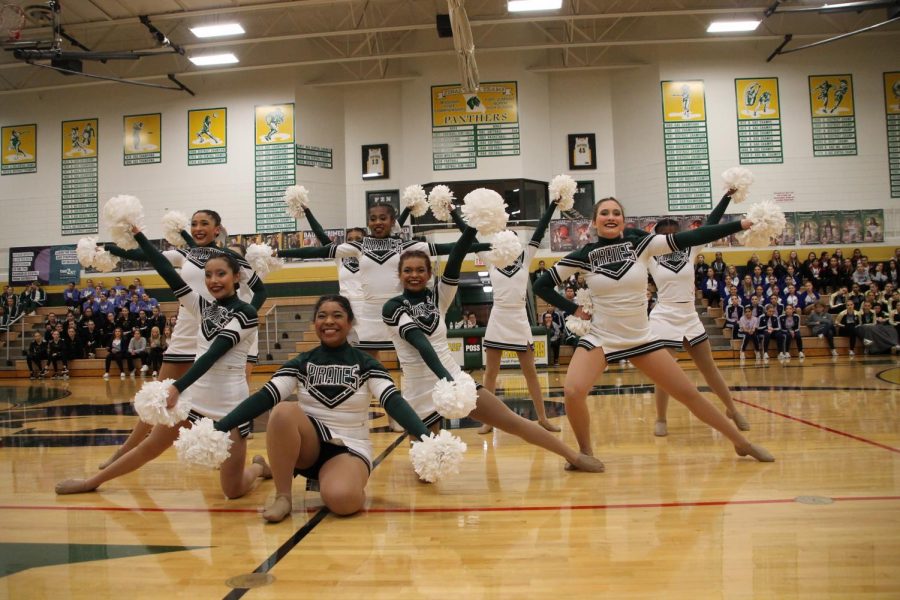 Last Saturday, January 25, the Junior Varsity Drill Team competed at their last competition of the season. Head coach Lindsey Purviance and assistant coach Katie Greenwell took the girls to the Fort Zumwalt North Invitational. The team came home with a first place trophy for pom and a second place trophy for hip hop.

The 10 girls on the team had spent the last seven weeks intensely preparing for this competition, perfecting all of their tricks, skills, and performance quality. The coaches had drilled new choreography into the girls’ minds. Then they went back to make sure it was perfect.

The night before, they had practice to make sure they had both of the performances down. Then, before they even knew it, competition day was here. The team was up bright and early Saturday and had to meet at Pattonville at eight in the morning.

Once they all got to the competition, they went to their dressing room and immediately started preparations. The two coaches helped the girls put on their makeup and get their hair ready. Then it was time to practice.

They all went into the hallway outside of their dressing room and began to run through their dances. Once they were done practicing, it was time to put on their uniform and go perform. While JV was waiting in the tunnel to perform, Varsity Drill Team surprised them, coming up to support JV during their last competition.

Once the coaches took pictures of the two teams, it was finally time. They walked into the gym to perform their first dance. Hip Hop was the first dance that they were going to perform.  All of the coaches, varsity, and the girls’ parents were screaming and cheering as they took the floor. Then their music started and they began: everything went as smoothly and it could have gone.

Before anybody knew it, the dance had ended. As the girls hit their ending pose, the whole gym went wild. Everybody was cheering for our JV Drill Team. As they walked off the floor, everyone could see the proud look on all of the girls’ faces. There was no time to waste, however; they had to immediately start getting ready for pom and rushed back to change uniforms. Once they were changed, Coach Lindsey pulled their hair into a bun, and Coach Kate put their bow in.

While JV was getting ready, Varsity was getting them pumped to perform pom. Once they were all ready, they went to practice and stretch in the hallway. They could not practice for long. The girls all went back to the tunnel and waited.

Once the team was called, they walked into the gym and cheered onto the floor to their first position. The music started, and every girl that was dancing had hit every skill and trick. Once the performance was over, the girls cheered off, watched two other teams, and waited for awards. They all sat in a circle and held hands.

Once their hip hop category was called they all leaned in closer to each other, and they did the same with pom. Pattonville Junior Varsity Drill Team closed out the season with a second place trophy in hip hop and a first place trophy in pom. The two coaches could not have been more proud of the girls.