Band Marches Their Way into a New Season 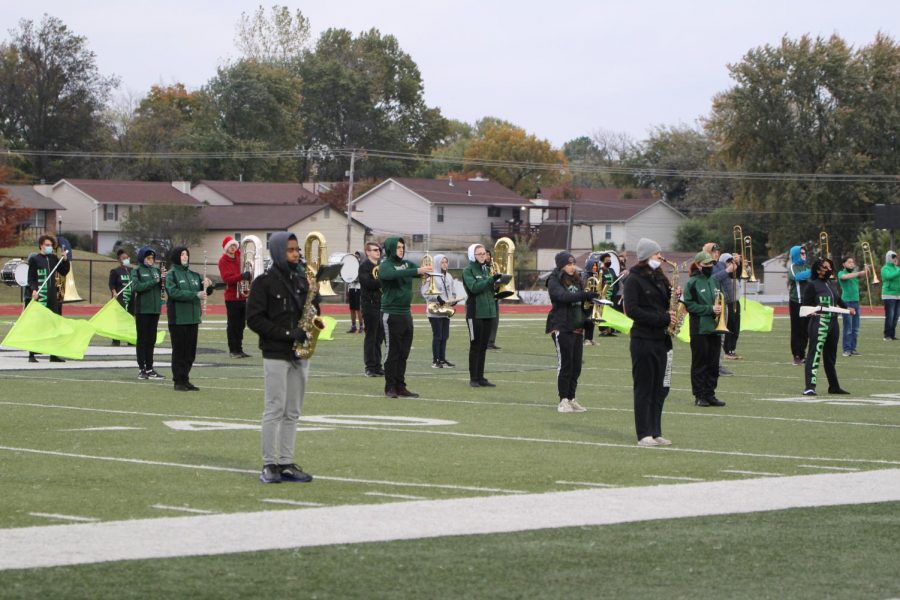 From the corner of the field, straight lines of musicians raise the gleaming brass instruments as drums thud behind them. Bright colored flags accompany the music.

Instead of their normal season of football games and competitions, Pattonville’s marching band and color guard performed at boys’ soccer games but with significantly less practice time.

Drumline section leader and percussion captain Madison Branson plays the snare drum. She says that the most challenging part of doing marching band online is “creating the bond.” She adds, “In a regular season we pretty much spend every day together and spend our weekends together so not having all those days has definitely made it harder to connect with everyone.”

With being online, the biggest difference currently is the show. According to Branson, “We usually spend months putting together a 10 minute show on top of pop tunes for the stands and drill team and this year we put together a short song in just a couple weeks.”

2020 hasn’t been ideal, and Branson says she misses “the energy and routine marching band gave me. I miss knowing that my Friday nights were going to be spent hyping up the crowd and performing at football games with my friends and getting to work hard to create a really good show.” There are some positives however for being online. Branson asserts that, “Although I miss everything about last year, this current season has really showed me how dedicated most people are to be able to do the thing they love no matter how restricted and has taught me to never take anything for granted.”

Marching Band Director Mr. McFarland thinks “The most challenging part of this entire experience is having the patience and understanding required of everyone involved. This is not how any of us imagined this marching season would be. For example, instead of having a 7-8 hour day for 3 weeks in a row, our end of summer practice schedule consisted of online practices, audio and video submissions and TONS of emails, phone calls and Remind messages to keep everyone informed of ever-changing plans.” Another big challenge has been “developing unfamiliar ways to provide instruction, receive performance assignments and give quick feedback so everyone can keep progressing their skills to be ready for the time when we do get to be together.” He remarks, “It would be way easier to just pause… but when you are part of something that’s bigger than yourself–like a music ensemble, you have to learn pretty quickly that other people are counting on you.”

In person marching band practices have definitely been different than previous seasons, but practices have been good according to Mr. McFarland: “Things have gone very smoothly and there has been noticeable progress from the first in-person practice.” Because of volume troubles from practicing on laptops from home, it has been difficult to practice loudly, McFarland explains. “On our first day together, the directors kept encouraging them to play louder to sound more confident. Each day, that got better and better.”

During this time restrictions are needed to keep everyone safe and healthy. McFarland says, “All students and staff have been completing daily health screenings. Anyone who wasn’t feeling well was instructed to stay home to try to keep everyone else from exposure to illness.” He adds, “There are assigned areas where each instrument case must be placed at the start of practice so we can keep our large group spread out.”

Because of Covid, the placements of standing is much different than months ago. “The warm-up formation we stand in has students spread out at a 5-yard (15 feet) distance in every direction which exceeds the recommended guidelines from ongoing health and safety studies by music professors and scientists nationwide.” In addition, Mr. McFarland explains that “each student was given a bell cover to help reduce aerosol spray from their instruments into the air. And, when students were sent to small group breakouts for short periods of time, their sections were spread out all throughout the stadium complex to provide safe distancing.”

At the end of October, the marching band and color guard held a livestream event at their last outdoor practice. Band director Mr. McFarland describes the difference in their performances: “In addition to performing at Varsity Soccer games in October, we wanted the students to have a performance opportunity that could showcase a lot of the material they had been working on virtually and in-person. Since it had been difficult for family members to attend due to reduced spectator numbers, a livestream event worked out well because family and friends could see and hear our progress, make encouraging remarks to our students and enjoy a small sample of what the fall season was supposed to be. We had people watching us from Missouri, Illinois, Michigan, Iowa, Utah, Arizona, New Jersey and California!”

In the winter band would normally go to a variety of different competitions to perform and compete but because of the conditions right now that is not possible so Mr. McFarland acknowledges, “All of those things will likely look different, so we’re waiting to see what will be permitted and we will adjust our normal procedures as needed in order to provide entertainment and spirit in the safest ways possible.”

Upcoming concert performances will likely include some sort of streaming format since it doesn’t look like large audiences will be allowed any time soon.