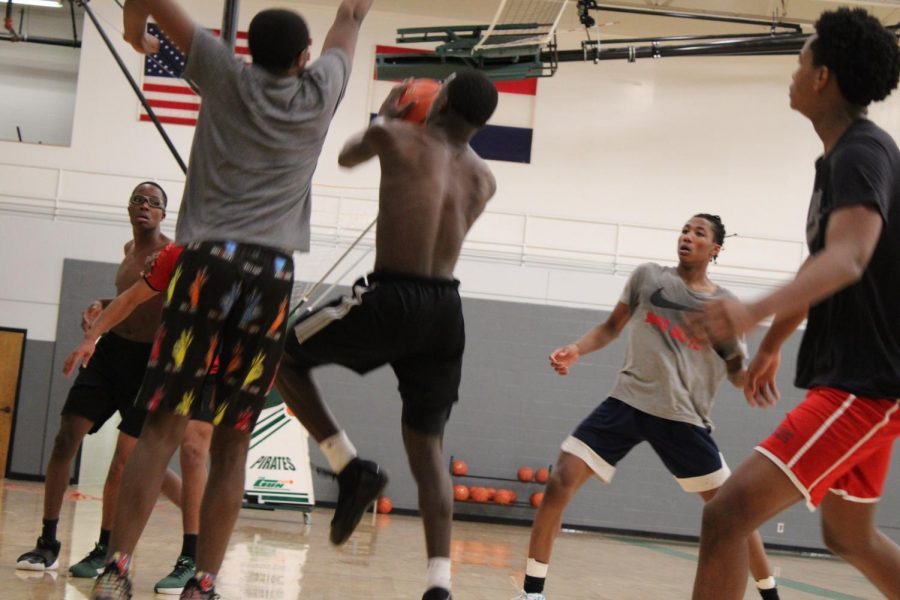 Levi Banks at one of his first varsity practices of the 2020-2021 season. As a person of color, he has faced many challenges due to his skin color but that has not stopped him from being the best he can be.

After a heavy loss against a rival JV volleyball team, and just overall not a great day for me mentally, I decided to go the bathroom to pull myself together and calm myself down. While rinsing my face and drying myself off, I heard two girls on the opposing team enter the bathroom laughing and celebrating their win against Pattonville.

I decided not to pay any mind to it and carry on with what I was doing before. I briefly turned around and I noticed that the girls were white and when they saw me glance at them, they started getting quieter and started whispering to each other. Although I was trying to ignore them, I could not help but hear them say words like “ghetto” and “ratchet.”

I tried to convince myself that they were talking about someone rather than me, but it was a little difficult knowing that I was the only black girl in the bathroom at the time.

Immediately leaving the bathroom was the first thing on my mind. As I was getting prepared to leave, in disbelief I heard the n-word slur coming from one of the girls.

In that moment I was shocked, and I felt my blood rushing to my face and I almost forgot to breathe. It almost felt unreal because I would have never thought I would experience this blatant racism at a young age.  After coming back to reality, I confronted them by saying,  “Excuse me?” in a stern and enraged tone.

Instead of expressing regret for their actions, they just looked at each other and laughed. Immediately after that confrontation, I knew I had to tell an adult so that this could be handled correctly.  I rushed upstairs and the first adult I saw was the referee that officiated our game.

I told him everything that happened and all the information I could gather on what the girls looked like. He did not ask me any further questions, and he walked away without any sort of urgency. I later learned that he did not do any further investigation on the issue.

Tragically, for black student athletes, racism is often part of their experience. “I have to expect racism,” stated Rickie Ruff, a junior and a volleyball player. As a person of color, she has experienced oppression and racism even at such a young age. “This was back in 2018, and I was at an open gym for a club I had never played for before. It wasn’t the players I experienced racism from; it was more so from the parents. My immediate reaction towards this issue was just to keep playing volleyball and to not let them and their racial views get to me.” While she kept playing, this was a situation she never forgot because of the parents’ vile and traumatizing actions.

And, student athletes do not always know what to do or what to expect if they report racist behaviors. Often, they remain silent, accepting that these hateful interactions are something they will have to deal with.

But, schools do have systems in place. In my situation, Dr. Dobrinic, head principal at Pattonville High School, immediately became involved, making sure he found out who the girls were, keeping ongoing communication between my mother and me, and making sure the issue did not go unseen.
“The most important thing I want the student to know is that I am taking it seriously, making sure the student gets an immediate follow up, making sure they know that is getting handled, and trying my hardest to right the wrong,” said Dr. Dobrinic.

Athletic Director Jason Sellers also plays a big role in handling incidents that occur for Pattonville athletes, even when they are at another school. In my case, he worked to make sure justice was served, calling the other school’s athletic director, who eventually found the girls responsible and dealt with them.

“My job is to get in contact with people and get answers as soon as possible, but to also make sure that you the student feels cared for and safe.” He wants to “investigate it to the fullest and makes sure the victim is satisfied with the consequence provided by the other school.”

Pattonville is known for our diverse student body and a welcoming environment, which allows students to feel safe and heard. Dr. Dobrinic explained that Pattonville continues to work towards creating a welcoming learning atmosphere for all students. He sees his role as “ensuring that opportunities are there and making sure that they have a representative staff filled with diversity so that they can connect more with the students, and being visible for all students and their hearing concerns.”

The black community and many other minorities face daily challenges based off their skin color. Whether it is going to the grocery store, going on vacation, or even playing the sport they love, some of those interactions are detrimental to their mental health. Most of these interactions go unnoticed or not talked about because, for some people, it happens every day and they do not feel like these racist interactions are important enough to talk about.

People of color have impacted the world in many positive and creative ways, yet are still treated with disrespect and hatred. Many young black men and women athletes have broken records, won championships, and have entertained millions of fans around the world, but no one exposes the ugly side of it all.

Racist interactions can impact a teenager and even a child in a very powerful and negative way, leaving them with trauma and self worth issues. Having allies and supportive people in their corner helps kids have confidence to face these challenges. Creating a safe and nurturing environment allows these students to become more open with their experiences and have more self confidence.

Deciding not to say anything about racist slurs not only into feeds the aggressors’ behavior but allows them to continue without any consequence or backlash. It is not an easy process, but for me, it was a battle worth fighting. In my situation, I had support from my principal, my parents, my athletic director, etc. And, the athletic director from the other school was supportive, finding the culprits and asking if I was okay. I was heard, but that does not happen for everyone. I don’t only want justice for me. I also want justice for people who are silent.