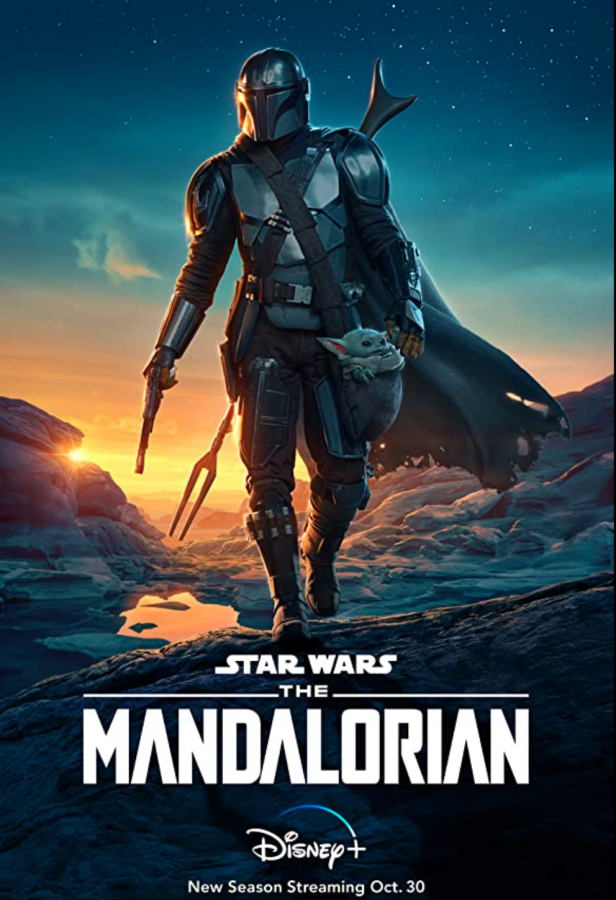 The Mandalorian TV poster featuring the main character of the show which got a 93% on Rotten Tomatoes after the drop of season 2.

The Mandalorian, which recently dropped its second season, lived up to original Star Wars standards and sparked nostalgia for a lot of old school Star Wars fans.
The Mandalorian follows a Mandalorian, a bounty hunter in the Star Wars universe, in his adventures across the galaxy. The show begins with him getting a high paying bounty to capture what the public refers to as Baby Yoda.
This story takes place after Episode VI, The Return of the Jedi and approximately 25 years before The Force Awakens. The New Republic is now in place but there are still Imperial soldiers around.
Some Pattonville students are all in. Sophomore Nicholas Toler is one of them.
“I think The Mandalorian stands out in the Star Wars universe for the fact that it doesn’t have as many ties to the main nine movies, especially in season one,” Toler said. “Most tv shows and spin offs have plenty of references to the movies such as characters, planets, events and so on. The Mandalorian doesn’t have nearly as many as the other movies and shows. The lack of references to the movies gives it also adds more lore to the canon Star Wars universe.”
The Mandalorian does seem to stand on its own as well as tie into the rest of the Star Wars universe in an interesting dynamic.
The cinematography really felt like Star Wars, in a way The Force Awakens didn’t. It had the action it needed without it overpowering the plot line. The fight scenes were realistic, at least by Star Wars standards. The characters were well developed over the course of the two seasons. There were characters in season one that could have been thought of as inconsequential or irrelevant but came back into play in a big way in the second season.
Toler agrreed. “I felt like all of the characters had impactful roles in the overall plot and all interacted really well with one another. Some attributes of the main character that make me like him are his unbelievable fighting skills, his righteous cause of protecting a child, and how he stays calm in every situation. The rest of the characters I enjoy when they have good chemistry with one another. The humor and the stress they share is really good. The acting is also really good. The Mandalorian shows emotion without even seeing his face almost all the time,” Toler said.
Shortly after season 2 dropped, actress Gina Carano who played recurring character Cara Dune, a rebel fighter turned freelancer, was fired. Disney claimed the firing was because she compared being a Republican today to being a Jew during the Holocaust. This was not the first of her political comments on social media, including comments that mocked mask wearing and claims of voter fraud during the 2020 election.
“The recent firing of Gina Carano was unfortunate but not unexpected after what she said. Disney is a no tolerance company when it comes to extreme controversy and they did exactly what they were supposed to do, and have done in the past. It probably could have been handled differently but I’m not surprised in the slightest about how they handled the situation,” Toler said. LucasFilm has said that they will not be recasting Carano’s character but have not said anything on what will happen with her next season.
With a 93% on Rotten Tomatoes and a massive surprise at the end of season 2, the Mandalorian has shaken people and given them a reason to love Star Wars again.