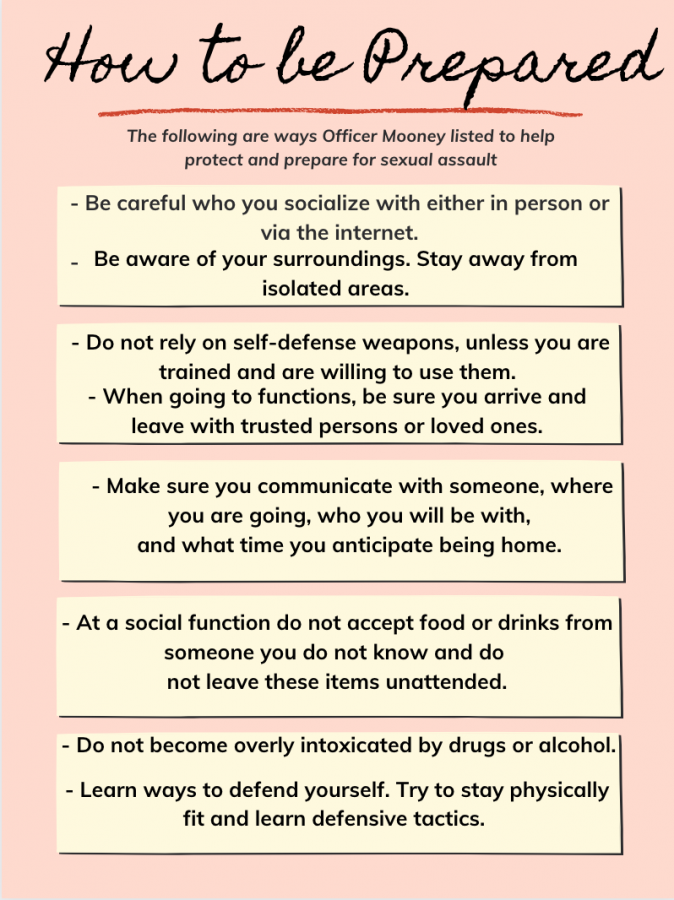 Although these tips can dramatically decrease the chances of sexual assault, they can’t prevent it 100%.

The most common sexual assault targets are children, teens, and women, according to School Resource and Maryland Heights police officer Mike Mooney.

“The farther these victims are from trusted friends or loved ones, the easier it is to become a victim,” Officer Mooney said.

The nonprofit One Place Family Justice Center, a safe haven for sexual assault victims, notes the effects of isolation. Without having a trusted friend or family member to talk to the more likely the victim will be stuck in the loop whole of long term sexual assault. The website notes, “Isolation is a form of abuse often closely connected to controlling behaviors…by keeping him/her from seeing who she/he wants to see, doing what she/he wants to do.”

Many sex offenders tend to seek young children. Going along with the abuse of children, females and males are most often victims of sexual assault before reaching puberty.

Common long-term traps or concerns include isolating victims from friends and or family, especially in long term abuse situations. Officer Mooney explained, “Oftentimes, embarrassment is used by threatening to embarrass the victim.  This is especially true by using photos of the victim where the victim is depicted in photos in sexual or nude images.”

Sexting is a common and large trigger for long-term sexual assault victims. Women’s Law, a place for sexual assault victims to find legal help, said that sexting is really big in teens, assaulters can use nude or sexual images of people as a way to gain and keep power and control over them. The site noted, “The internet is the hunting ground for many subjects who are looking for potential victims.”

Due to the increase of people who use social media, the platform has become the primary place for suspects to find and lure their victims.

Short-term traps or concerns include going to places where the victim is separated from friends or loved ones at parties or bars.” There, the suspect tries to separate the victim who is in most cases, under the influence of drugs and alcohol. American Addiction Center says that around 43 percent of sexual assault cases involve alcohol used by the victim and 69 percent involve alcohol use by the perpetrator.

The most common suspects for sexual assault cases are typically someone who the victim knows. “Often times it is a relative, friend of the family, or person whom the victim goes with voluntarily (Date Rape),” Officer Mooney said.

Whether a co-worker, neighbor, family member, the known assailant is especially true with children, teens, and young adults. “The common perception that the sexual abuser is a person lurking in the shadows to attack a victim, although sometimes true is not the norm,” Officer Mooney said.

Sexual Assault cases can obviously be inevitable. If it were ever to occur either to you personally or to a close friend/family member, here are some ways to try and help.

Counselor Mr. Chaun Tate said that there are a number of counselors to talk to either at school or from outside sources. In addition, there are hotlines (many are provided on RAINN, the nation’s largest anti-sexual violence organization) and support groups that are available 24/7 in your area.

Although there are numerous ways for sexual assault victims to feel safe and open up in, it still definitely takes time for the victim to open up. It can take weeks, months, or even years for victims to do so. If/when the time does come, “you can’t force it out of them…they’ll come to you when they’re ready,” Tate said.

Tate said that the hardest part when a student comes in and opens up about their personal experiences is, “honestly, trying to be there for them and letting them know that they’re safe.”

While no one ever wants to find themselves needing them, resources are available here at Pattonville, from counselors to officers to psychologists, to help anyone struggling.