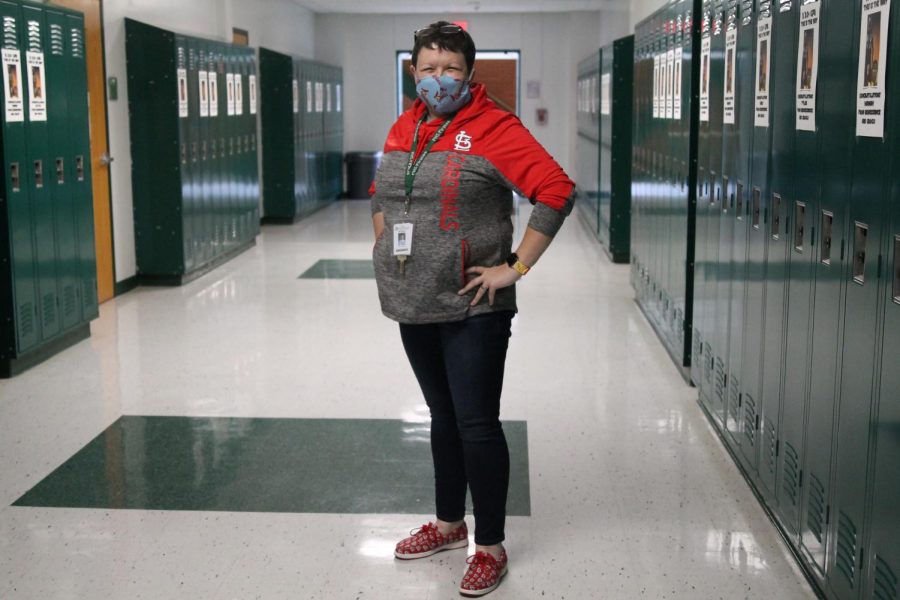 Cardinals fan Ms. Kean is excited about tonight's Wild-Card game against the Dodgers. While she finds it slightly concerning that the Cardinals don't have home field advantage, she said, "When you win 17 of the last 19 games, I think you'll be ok."

The most prestigious and well-loved sports team in St. Louis is by far the Cardinals. Recently, they have set the league on fire with a 17-game win streak, and the city has been passionate every step of the way.
Ahead of tonight’s National League Wild-Card game against the Los Angeles Dodgers, the St. Louis Cardinals are red hot going into tonight’s game.

Starting with a win against the Cincinnati Reds on September 11, the Redbirds ran away with the third longest win streak in the last 60 years before a 4-0 loss to the Milwaukee Brewers on September 29.

Pattonville Administrator and avid Cardinal fan Dr. Jon Fitzgerald described the most memorable moment in the historic 17-game stint. Dr. Fitzgerald said, “I believe it was win number 16 where we came back against the Brewers. I remember they were down early and they pieced together runs and came back.”

Of course the team’s success starts with its players. Big fan favorites on the Cards are Yadier Molina, Adam Wainwright, and Nolan Arenado, but an emerging star has proven to be a diamond in the rough with his recent play. 26 year-old Tyler O’Neill was scorching hot in the month of September. He recorded 11 home runs while batting an average of .303.

“Tyler O’Neill. Easy,” said Dr. Fitzgerald, when asked who has been the most exciting player on the Cardinals to watch.

Throughout the season however, Paul Goldschmidt and Nolan Arenado have led the team’s offensive numbers statistically. Arenado leads the team in home runs and runs batted in while Goldschmidt leads the team in batting average, hits, and on-base percentage. There is always a special energy when those two are at the plate.

Success for the Cardinals’ tonight starts with the bullpen. The pitching matchup is Cardinals’ ace pitcher Adam Wainwright going against grizzled veteran and St. Louis born Max Scherzer. Against the Dodgers this year, Wainwright is 1-0 with four strikeouts.

The Dodgers are known for being one of the most star-studded lineups in the entire league, and certainly have one of the best offenses in the league. Wainwright has his work cut out for him tonight. On the contrary, Max Scherzer has been very cold in his last two starts. He’s allowed five runs with just five innings pitched in each game.

Dr. Fitzgerald said, “Our chances are really good. We are super hot right now. Waino pitching tonight; and the lineup came together at the right time.” With the Cardinals’ ignited offense and star pitcher, they certainly pose a threat to the Dodgers.

No matter what team or sport, St. Louis always possesses a fanatical narrative attached with the postseason. For the 2019 Blues, the story of coming from last place in the division to the lowest seed in the playoffs, and then to ultimately become champions was a tale that is still talked about daily in St. Louis.

This year, that story is the Redbirds’ win streak that led them to tonight’s game. According to ESPN in August, the St. Louis Cardinals had a 1.3 percent chance of making the playoffs. On September 28, the Cards’ clinched the wild card spot to play the Dodgers.

“My heart says the Cardinals, but I’d least like to play the Giants,” Dr. Fitzgerald said about the team most likely to win it all.

The current favorite teams to win the World Series are the Dodgers, Astros, and the Giants, but the whole city of St. Louis is backing the Cardinals.

Tonight the Cardinals’ are the underdogs in Los Angeles, but with blazing momentum, heart, and the city on their backs, the St. Louis Cardinals play in one of the most important games in franchise history. Let’s go, Redbirds.