Crossing the Finish Line at State

The Cross Country team here at the high school had a great season. What a good way to end the season. 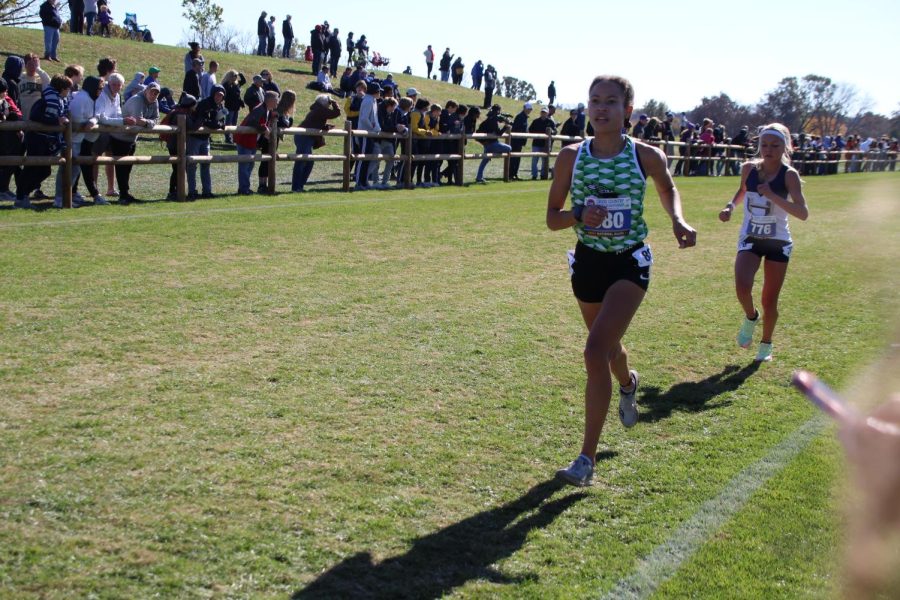 For Justin Bowers, running in the State meet was a new experience. Bowers described the event. “I think running at State was a great experience for me. It was my first time going, and I only just barely made it, so I didn’t feel very pressured in any way.”

As a senior, Bowers only had one shot, so he chose to enjoy it. “The whole experience was quite exhilarating. There were so many runners all around me for most of the race, and every corner I turned it seemed there were another hundred spectators cheering us all on. Even though it wasn’t my fastest race ever, I definitely think it was the most energetic atmosphere I have been a part of.”

Senior Keilah Wilkes is the fastest girl to ever run Cross Country at Pattonville. And, she is no stranger to the State meet. This was her third time going. Wilkes enjoyed the meet: “I thought running State was really fun. It’s always exciting getting to race against other fast people, and getting to do it at the highest high school level makes it all the more worthwhile. Plus, when you add in the State atmosphere with all of the fans, officials, and of course the State merch, everything is just automatically cooler. Running is no easy feat, but the rewards are always more than two-fold,” Wilkes said.

A sophomore, Luke Stevenson is already in the top ten of fastest boys to ever run Cross Country at Pattonville. He was a first-time State meet runner. “I thought it was a lot of fun. Running at State is totally different from an ordinary race during the season,” Stevenson said. “This race had all the fastest people put in one race. During the race I never found myself breaking away from the other runners, we ran together the whole time.”

In addition to the competition, participants noted the increased crowd size. Stevenson explained, “There were also way more people there to watch making it a whole different environment from a normal race. It was definitely an amazing experience and I hope to be back next year to compete again.”

Keilah Wilkes was pleased with her race. “I was seeded to place 15th and as we were wrapping up Districts, I definitely felt that top 10 was a possibility and something I wanted to make. Class 5 was pretty stacked last year and we had a lot of returners from the top 25 this year, so being able to jump 10 places from last year and finish with the fastest PHS Girls’ XC time of 18:22 was exciting and something I’ll never forget,” Wilkes said.

Stevenson also liked his finish. “I was very happy with where I finished. My only goal was to get a new best time for the season, and that’s exactly what I did. I finished the race in 95th with a time of 16:43, shaving off three seconds from my old best. Going through the line knowing I got a new PR was an amazing feeling and the best thing to end the season on.”

For Bowers, the State meet gave him a chance to showcase the skills he obtained throughout high school. “I crossed the line at 17:33, my fastest time of the whole season, and my second fastest time ever by only six seconds. While I know this is a great accomplishment, I can’t help feeling that perhaps I could have finally beaten my sophomore PR, if I had just done slightly better in a few different places, but what’s done is done, and I still believe that I accomplished something. As far as placement goes, I was 139th out of 159 runners, which just by the numbers is really not that great at all, but I have had to remind myself that it was still the state meet, where everyone is super fast, and that helps me feel a little better about it all,” Bowers said.

As Pattonville says good-bye to Justin Bowers and Keilah Wilkes we hope that Luke Stevenson returns to State next year. Great job, runners!