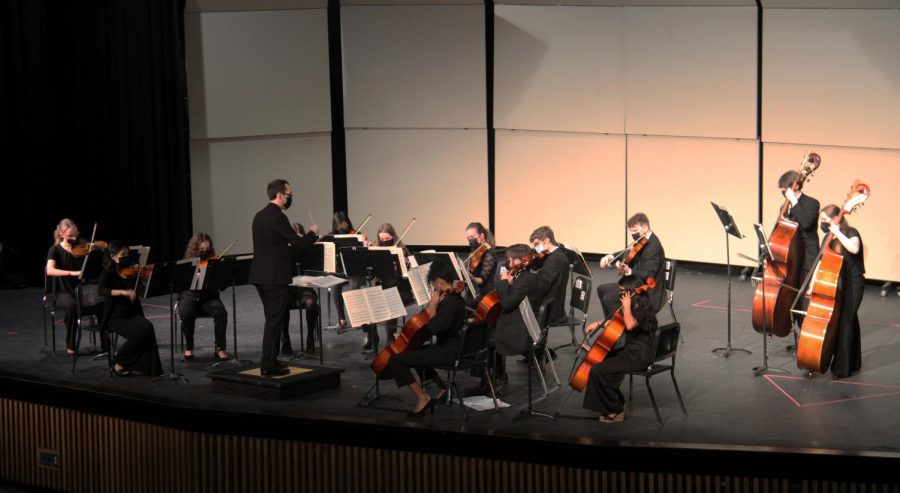 On Friday, March 4, Symphonic Orchestra directed by Mr. Rueschhoff took home an Exemplary rating after not having large group last year due to the pandemic. Mr. Rueschhoff, as his first year as the PHS Orchestra Director, said he was basically worried about everything. "I'm nothing if not an overthinker so I wanted to perfect every last detail," he said. "But in the end, it all worked out wonderfully."

After a year’s break due to the pandemic, the Pattonville High School’s Orchestras made their way to the stage and performed at their Large Group Festival at Hazelwood Central High School.

“Both groups did a really nice job of playing musically and made it an enjoyable performance for both themselves and the judges,” Mr. Rueschhoff, PHS orchestra director, said.

An Exemplary score is the highest score any orchestra can receive, with an Outstanding score being the second-highest.

“Overall, I believe they all received the appropriate scores,” Mr. Rueschhoff said. “There were a few slips that usually don’t happen during class, but that is to be expected during any performance.”

One of the judges graded much more harshly than the others,” he added, “but that’s how judging goes a lot of the time – it is very hard to make music objective as there are so many different ways to interpret a piece.”

Talisa Prabhu, junior and cellist in Symphonic Orchestra, was “nervous because I knew we sounded good, but I wasn’t sure if we were good enough to get a 1. However, after we performed, I knew we had put on a great performance.”

Prabhu said that she enjoyed playing “Toccata la Rocca from Suite Concertante” the most. “It is so fun and energetic,” she explained. “The piece gets my adrenaline pumping when we play it well.”

Mr. Rueschhoff said that “The Jig from St. Paul’s Suite” was the most fun piece to direct. “[It’s] just a fun piece in general, so it’s a lot of fun to be essentially dancing around on the podium while the students perform,” he said. “The students were all clearly enjoying making music on this one as well and it is so satisfying to see a group of people communicating like that without speaking a word.”

Going into a large group, I felt both excited and nervous (probably more of the latter),” Norina Shao, sophomore and violinist in Chamber, said. “If large group had been closer to the beginning of the year, I think that I would’ve been way more nervous, as it would’ve been one of my first performances in two to three years.”

“I really wish that we [Chamber Orchestra] could’ve gotten a rating of 1 overall,” Shao added, “but I think I’m content with an average of 2.”

While many may think that preparing for large group would be just like preparing for a normal concert, Prabhu explained how it took a lot more effort.

“It wasn’t like preparing for a concert because our audience at concerts are our parents and they will love us regardless. However, at large group festival, we were playing for trained judges,” she said. “This meant that we needed to give more attention to our precision and refining details in the performance. In the practice room, before we performed, we prepared to go on stage by doing jumping jacks. It helped us relax before we performed.”

When reflecting on the performance, Shao thought that she did well with tone, dynamics, and musicality, but could have improved on rhythm.

Prabhu agreed that they did well with dynamics and musicality, along with articulation, but she could have worked on intonation. “It’s something string players can always improve on.”

“It is really easy to stiffen up on stage and worry only about technique which tends to make the music pretty boring,” Mr. Rueschhoff said, “but they all rose to the challenge. And all of the judges commented on the nice musical effect that each group created.”