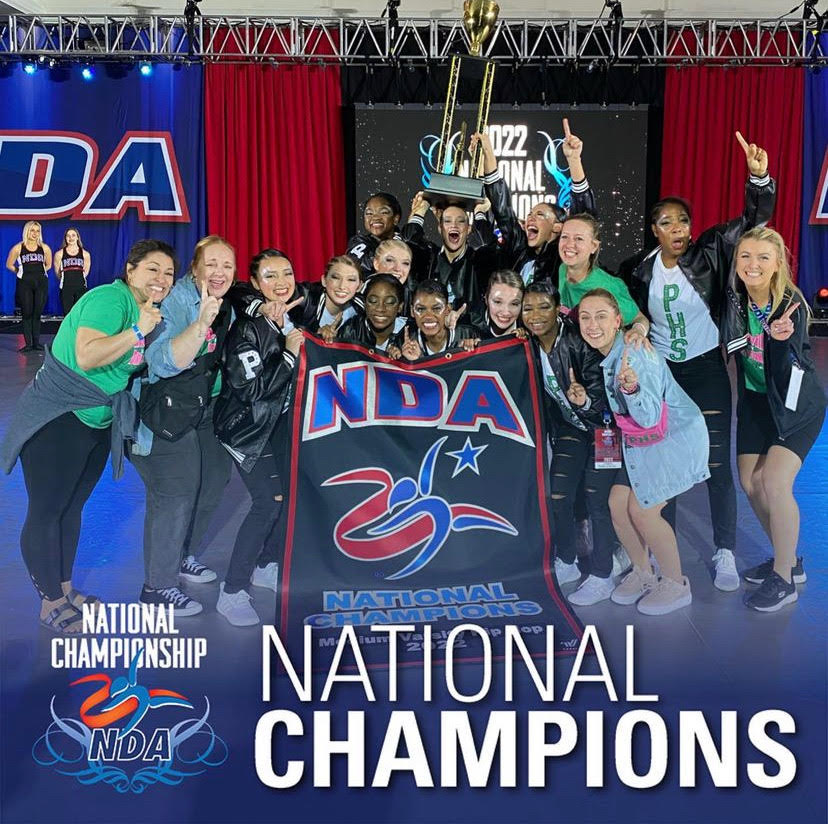 VDT Brings Home the Trophy from the Big Stage

No lights are brighter for a dancer than the ones on the national stage. From the texture of the floor from the energy of a nation-wide crowd, the close to one hundred teams that gathered for the event knew it would be different.

And, for Pattonville Varsity Drill Team, it was. For the first time in 22 years, the team earned a first place ranking in the National Dance Alliance competition in the medium hip hop group. This is the fifth time in the history of the team that they have brought home the trophy.

The team went through two rounds of competition to get to the top. After the first round, they placed fifth out of twenty six with the score of 88.03 out of 100 points. The girls gave it their all for the second round and their hard work paid off when they took 1st place out of the 17 teams in their division.

The scores were close. The difference between Pattonville and duPont Manual High school from Louisville Kentucky was .4 points. Even with a small difference, it was still an important win for the team.

Part of their success is fighting for each other, and they did just that.”

After approximately 306 hours of blood, sweat, and tears in practice, the team was announced national champions. The coaches, Kristen Riggs, Lindsey Purviance, Katie Funderburk, Kate Greenwell, and Grace Burgos ran up on stage as the girls jumped and shouted upon hearing the news.

Riley Johnston, a junior on the team, instantly thought that “this must be a dream.” After the initial shock went down she then realized “how the little me that wanted to be a VDT girl, would be so proud.” Even though the practices had an effect on her school and social life, she still managed to show up for the team and be a part of the big win.

After pushing the girls to be the best they could be, Coach Riggs’s reaction to the girls winning first place was beyond emotional.

“OMG, after spending hours upon hours watching this team devote everything to their routines, cry, laugh, struggle together, achieve together, it was the absolute best feeling to watch it all come together in the end. My coaching heart was beaming with pride,” Riggs said.

Coach Riggs attributes the team’s success to the bond between the girls that is built from day one of the season. She was pleased that the girls built a relationship of trust and put everyone’s best foot forward for the national stage.

Coaches said that they pushed the team as much as they could, but in the end, Coach Riggs said, “Part of their success is fighting for each other, and they did just that.”