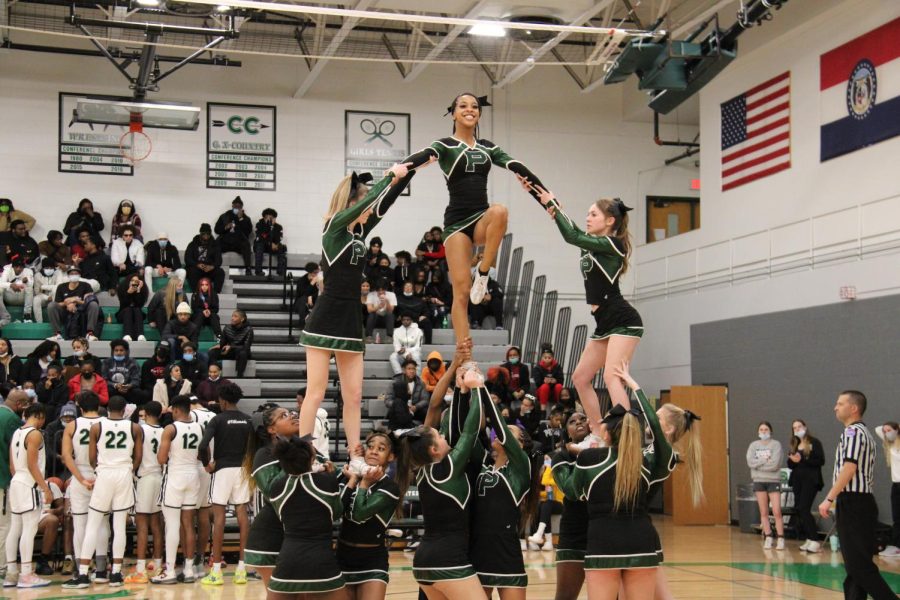 Varsity Cheer performs at a basketball game at Ladue High School. The team went on to place fourth at Nationals.

Varsity Cheer: Fighting for the Title

You walk through the doors, the lights hit your face, all you hear is cheering, and you hit your beginning formation. You’re thinking about the thousands of times that your coach has said to your team, “Dedication and hard work is how you make it perfect.”

Pattonville’s cheer team is not exempt. Not only do they support sports throughout the school season, but they also have a competition season. The team competes in three competitions: Regionals, State, and then Nationals.

The team competed at the regional competition for the first time in two years. With competition season in swing, practices become more essential. Tate Holt, a senior on the team, stated “Our practices always start with a warm-up and stretch. Then we will work on the strongest parts of the routine to build confidence.” Then the time came, for the VRAAHS to take the mat. Varsity cheer took home a second-place trophy.

“We were all a little disappointed we didn’t win,” Tate said, “but still happy with the progress we made throughout the weeks leading up to the competition.”

The VRAAHs then geared up for their second to the biggest competition of the season. The Missouri State competition was at Missouri State University in Cape Girardeau. Bianca Appleton, a junior on the team, said, “A motivation for the team is to have a chance to defend their reigning title.” Last year the team won first place in State and brought home a title. The team continued to practice every day until their routine is just right. Appleton stated, “Our coaches said we have a lot to do, but with the right time management we will be able to get it done.”

After their state competition, the team took no breaks. They immediately started preparing to compete at Nationals in Dallas, Texas. To the members of the team, this was not a vacation. They practiced for countless hours while in Dallas. While they did do team bondings and team dinners, the team was focused on their goal.

VRAAHs were able to return to Pattonville placing fourth at Nationals. They also received an award for the best use of jumps in their routine. Motivation, dedication, and hard work are what made this year successful for varsity cheer.