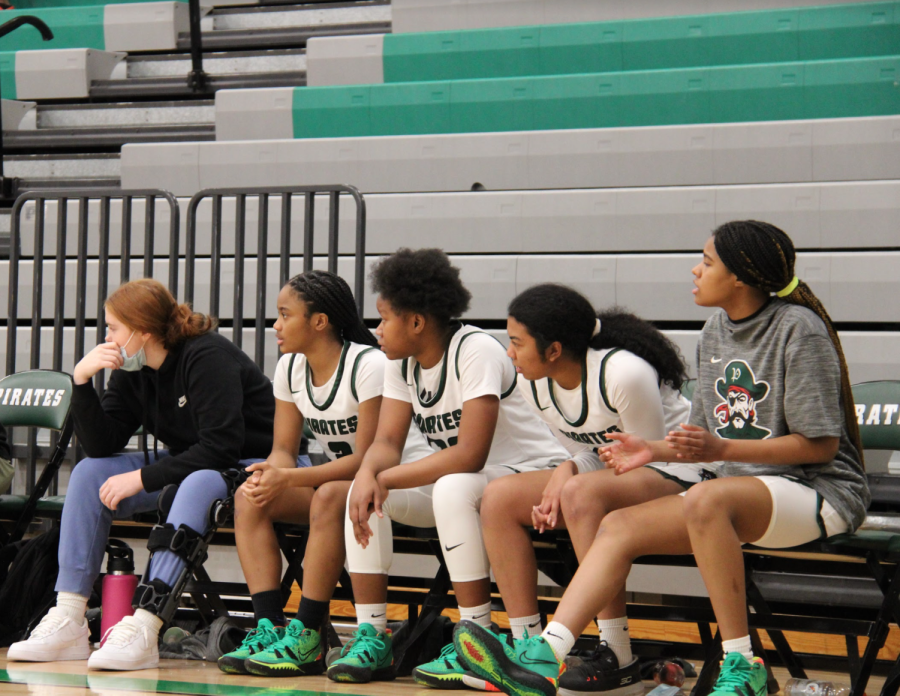 For swing player, Zoe Cox, cheering on her teammates on the sidelines was always something easy to do.

The thirteen girls on the JV Basketball team achieved a record of 11-8.

Head coach of the JV girls’ basketball team, Ms. Foust expressed her pride in the team: “My girls this year had grit,” she said. “We were down 22-6 at halftime when we were playing Lafayette and we came back and beat them by two points in overtime.”

The team credited their willingness to support each other to their successes. Captain Amira Barnes showed her appreciation for her team. “Our teammates on the bench and our varsity teammates helped a lot. We all cheered each other on; being able to hear your girls cheering for you on the sideline definitely keeps you amped.”

Even with the amount of wins, they still had losses that they analyzed so that they could improve. Barnes explained that after a lioss, “Coach Foust would ask us what we needed to work on to make sure we were self aware. We would then focus more on practice to make sure we weren’t struggling during the game.”

Barnes attributed increase success to their practice with Varsity players. “One of the most helpful things in practice was being able to practice with the Varsity girls. Sometimes it was difficult and exhausting but it gave more challenges than we would experience in any of our games.”

In addition to challenging the JV girls by playing with varsity girls, Coach Foust had the girls focus on skills, conditioning, and plays that progressively would get harder throughout the season to keep the girls in good enough shape so that they could “beat any team up and down the court for a full four quarters,” Foust said.

Foust was committed to creating a sense of team. “On C days we always met in my room and had snacks, karaoke, and just hung out. When a team knows who they’re playing with and builds trust with one another, they play harder and win more often.”

The strong bond is something that carried Barnes during the final moments during a game against Lafayette High School. “My teammate Zoe Cox made the buzzer beater shot; there was so much going on within the span of 5 seconds. It was exciting, chaotic, and fun.”

Coach Foust described the pride she took in her team. “My girls gave me their all at every practice and at every game. They not only improved their game every single time they stepped onto the court, but built a family atmosphere within the team. They trusted each other, had a great time and we won a lot of games together. Their basketball IQ is higher now than it was back when the season started and I am excited to continue teaching them about the game I love next season.”