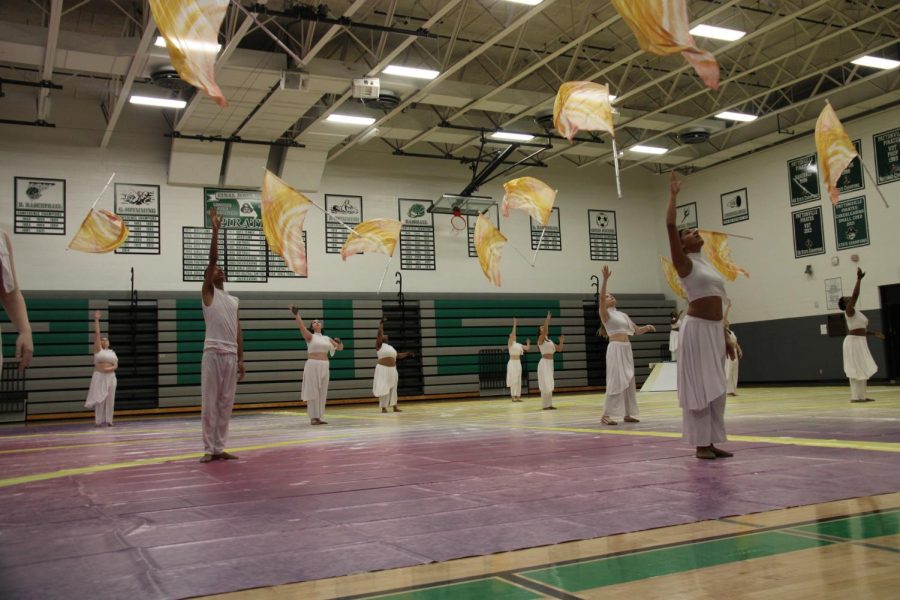 On March 31, color guard performs in front of family and friends in preparation to National Championships. They performed their final version of “The Inbetween”, which scored a 78, not quite enough to allow them to advance from pre-eliminations.

And, after four months of minor competitions and performances, Pattonville Winter Guard performed their routine “Other Side” at Nationals on April 7, scoring a 78, which prevented them from advancing to the semi-finals.

“I feel like we did our best because we got the highest score we’ve ever received, and nationals went so well for all the other guards, I don’t think we would’ve placed higher,” sophomore Cole Lorino said.

“We were all a bit upset,” sophomore Dylan Fontana said, “but it was still such an unforgettable opportunity. I don’t think that I’ll ever feel how I did walking onto the floor again.”

More than half of the team had never been a part of Winter Guard, before but they said that they learned pretty quickly due to the kindness of the team.

Senior Imani Miller understood their nervousness and helped the newcomers as much as possible.

“When I first started guard my freshman year, I was really unsure because I had never touched those pieces of equipment before and I was really scared and nervous,” Miller said. “But I started practicing more and more and then I eventually started to get it, then I realized that I love this sport, and wanted to keep doing it for the rest of my four years.”

Lorino joined Winter Guard and took two weeks to learn the basics. “I got a lot of recommendations from friends to join guard. I thought it would be fun to join and it’s super cool to be in the environment,” Lorino explained.

The team left for World Championships on April 6, and as they traveled to Dayton, they hoped to perform their best.

The team packed their bags, crammed into the bus, and loaded the trailer and vans with equipment.

After they arrived, they practiced and rehearsed before going back to their hotel to dress before their performance time, feeling anxious, excited, and ready.

“I really don’t remember performing. I felt prepared, but once the energy of genuinely being at WGI kicked in, adrenaline took over. I know we made a couple of mistakes, but I think this is the best I’ve done in a competition.” ”

Although the team didn’t advance, they stayed to support other guards and watched the World Class Finals on April 9.

“The stadium was absolutely packed and it was so awesome and eye-opening to see the best of the best performing. It really motivated me to try so much harder to maybe be on the level that these guards were on,” Fontana said.