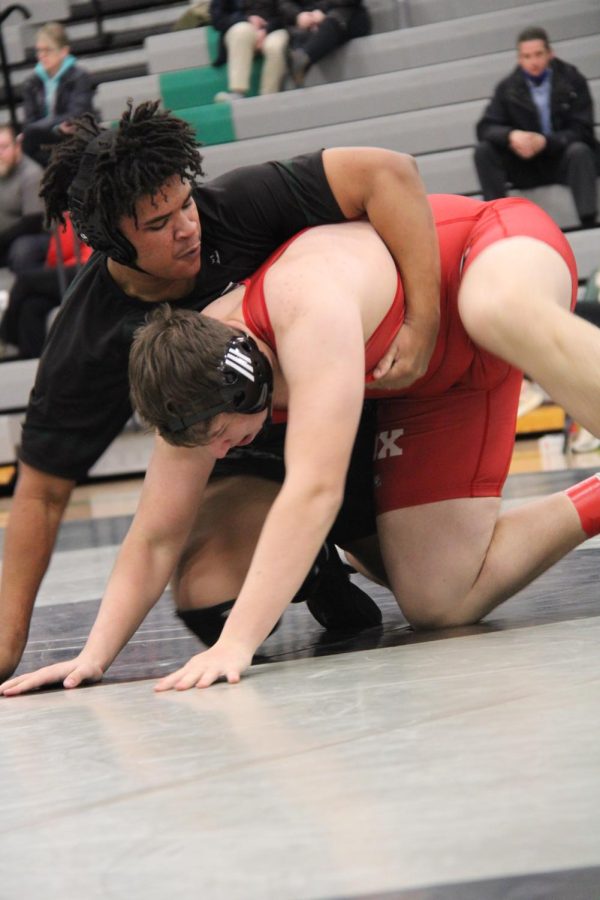 Daniel Davis locking his arm around his opponent, a Fox High wrestler.

Sweaty mats, a ref with a whistle poised at his lips ready to start the match, an opponent twice your size. The young boys’ wrestling team faced this challenge, often having to wrestle above their level.

In a sport with already low numbers, Pattonville’s team struggled to meet other schools’ experience levels.

“It’s just whoever the other team has, you wrestle. Seeing some of our guys struggle to see success because they’re wrestling above their level. It’s either wrestle above your level or don’t wrestle. It was discouraging that guys couldn’t wrestle at their own level and see success for their own experiences,” Assistant Coach Brown said.

Though the team was glad to have a chance to duel after last season being cut short, they knew they had to wrestle other boys who were bigger and more experienced.

Despite their shortcomings in numbers, two of the boys won All- Conference Honors. Paul Palermo, sophomore, got the sportsmanship award and David Dunn, freshman, got the All-Conference Second Team 132 Weight award.

Alfred Jenkins Jr. was a first year wrestler. He said his hardest match was “against Hazlewood West. My finger got injured and I had to continue to wrestle with it bleeding.” During that match, he spent the most time on the mat than he ever had previously.

Jenkins also struggled in practices against his duel partner. “He [Courtney] was my main practice partner and we were very competitive with each other,” he said.

Because of a lack of history between schools and a smaller team, Pattonville did not have a huge rival. They did hope to beat Ritenour because of the long-term rivalry between Pattonville and Ritenour in other sports. They were successful in this goal.
Although the team faced some difficulties, they were able to pull through.

“This year we actually got to have our different duels and see our guys go out and compete. Doing that and seeing some of those wrestlers get their first wins and win big matches even though they were inexperienced was exciting. Seeing their excitement was exciting for us,” Coach Brown said.