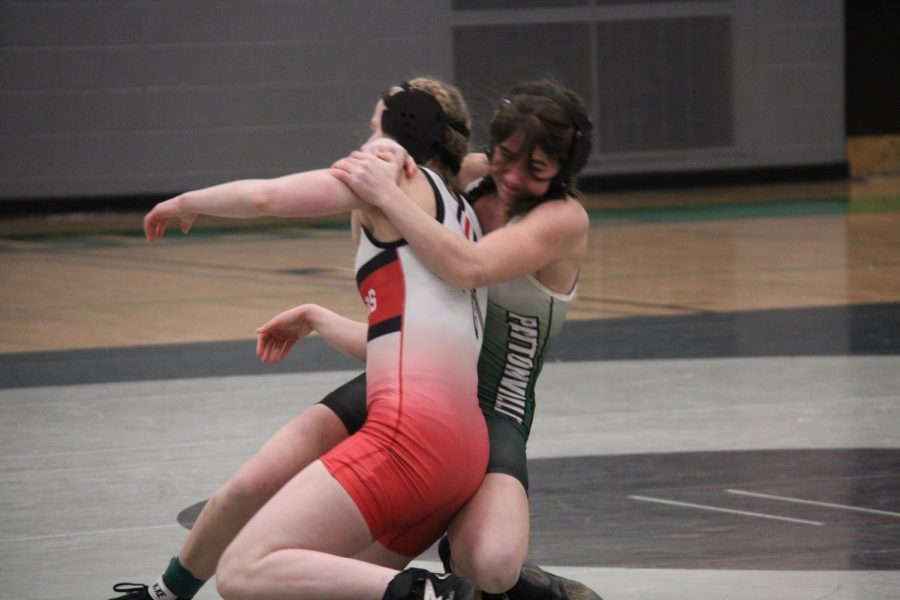 Junior Allison Basta attempts get an advantage on her opponent and get a pin in the match against Fox.

I bridged up and flipped my weight and pulled her shoulder to the mat. She was stuck over me and I was not at the risk of being pinned. I lifted my body up and she flipped over my body and bam. I pinned her and won the match.”

The PHS Girls’ Wrestling Team had a successful season, even though none of the girls made it to conferences.

Basta has been wrestling for the past two years and she has grown to love the sport and everything it has taught her.

“At first I was very nervous to join because I haven’t done anything like this before, but once I got familiar with it, I grew a love for the sport,” Basta said.

When first joining the team, some members experienced the fear of getting hurt or not being successful in the sport. Junior Jasmine I. Harris explained, “Being confident in yourself and your abilities and the people around you will allow you to perform your very best at practice and meets.” Harris also said that even returning members get nervous about certain meets.

“The wrestling team has shown to be very competitive yet encouraging to their teammates when going to meets or practices.”

Vogel, though new to the team, still has had many successes. Katie said, “The proudest moment was when I was at districts this year and I was 1 match away from going to state and everyone had to stay to watch me.”

Vogel explained that certain moments, such as winning an all-conference or getting a pin against a difficult opponent, were the ones the team looked forward to.

Although the girls had some disappointments throughout their season, their performance at districts proved to the school and themselves that they have the determination and perseverance to defy their limits.